Before Pauls’ search for a prefab 3 car garage, he was renting one from his neighbor and typically used it to store and work on his cars. Soon after, his neighbor informed him that he was going to be moving to San Diego so Paul needed to find an alternative place to store his vehicles.

It did not take long for Paul to find his new prefab 3 car garage builder but when he did, he knew he made the right decision picking Sheds Unlimited.

Pauls’ search for a 3 car prefab garage building was not as hard as some would think. He researched a bit on the web and found Sheds Unlimited. It did not take Paul long to decide who his new prefab 3 car garage builder was going to be.

He called Sheds Unlimited and spoke to Mark Beachy who was very helpful to Paul even on his first call. Concluding the call Paul scheduled an appointment to meet with Sheds Unlimited in house and speak to them regarding his future Prefab 3 Car Garage.

Mark spent a lot of time with us and helped with the steps needed to get a garage underway. By the end of the visit, we had a quote in hand.

Paul ended up selecting a 24×36 Standard Workshop Prefab 3 Car Garage as his car storage garage and has not regretted it since. He explains the step by step procedure in which Sheds Unlimited went through with him to help build his prefab 3 car garage:

Depending on the size of your garage, an on-site building may or may not be an option. To build on-site would cost more because it would take more time to assemble than it would at our shop.

Since Paul has owned his prefab 3 car garage, he has said it “exceeded my expectations” and said that the Sheds Unlimited crew showed a great amount of workmanship to get the job done.

He explained that there were some obstacles in his journey including the certificate and the raised sealed prints. However, he stated Sheds Unlimited guided him through it all and were there for any questions or concerns that he had.

Paul has since loved his new garage and spends plenty of time in it. This garage has become a place where Paul can store his cars and also work on them. 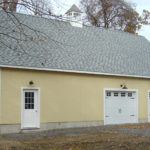 Words are not enough to describe the quality of workmanship the quality of the materials used the honesty and work ethic of the Sheds Unlimited Family .I have never seen such hard working and high… work ethics in every individual that I dealt with in a company
The price was great and while other people nearly doubled their prices Sheds Unlimited never changed theirs throughout the whole process.
I received a lot of assistance in the design from Japheth our salesman and each time a change was made he sent me a new set of diagrams and cost breakdown. Total honesty from the beginning you just don’t see anywhere else.
The selection of buildings, materials, sizes and options was good but if I wanted I could have chosen anything offering flexibility.Gideon was a great help here and had great patience . I met a lot of the family when I went to Morgantown to the factory.Eli gave me the full detailed tour of the facility.I was introduced to a fine family of individuals whose ethic were beyond reproach.
The garage arrived at 7 am and was assembled as much as it could be by 8:00 pm the same day.The overdoors were not available yet and the windows sent were temporary due to the supply chain delays .Gideon was great in procuring the temporary windows which a couple of weeks later which were replaced by the ones my wife and I had selected. This was a special trip made by Sheds Unlimited giving you an idea of the lengths they go to to satisfy the customer.
The quality of the materials was amazing but the workmanship was even better.
These men worked solidly for 13 hours with an afternoon temperature of 102 degrees yet the workmanship and quality were perfect.
Very special thanks and credit to Gideon,Japheth ,Eli the assemblers the carpenters and the secretaries for helping me with the completion of this project.I wish Even my foundation man said he hasn’t had an easier time because of the accuracy of the drawings.
The overhead doors 8X10 and 8×13 open with one hand.
Don’t waste time going elsewhere . YOU WON’T FIND THE PRICE, HONESTY , QUALITY OF MATERIALS ,WORMANSHIP AND WORK ETHIC than you will find at Sheds Unlimited .
THANK YOU SHEDS UNLIMITED
Richard and Dawn Cwirka
Read more “Rich Cwirka”