In need of bigger garage space to protect and work on his classic car collection, Jim wanted to find the perfect 4 car garage that would last him a lifetime. He came across plenty of local companies, but they didn’t sit right with him. He said, “They all made it seem too arduous and undertaking and somewhat expensive.”

He came across Sheds Unlimited through his search for a four-car garage and saw some examples that really impressed him. He instantly knew that this is the company he wants to build his garage and it wasn’t long until they started a conversation.

The process building up to his 4 car garage being installed went very smoothly. He explained that from the design phase to ensuring the foundation was properly installed, Sheds Unlimited was on top of everything. After getting the drawings (Sheds Unlimited requires a small nonrefundable deposit for a set of custom plans), he was able to work with the local town to acquire the proper permits.

The design phase included customizing the prefab car garage to meet his needs. Jim wanted access to the attic space with pull-down stairways. Sheds Unlimited included that in the design and was helpful in creating a color combination that fits in with his home.

Installation of a 4 Car Garage in Poughkeepsie, NY

Jim ended up selecting the 24×50 4 Car Garage, placing the order with a deposit, and began preparing a concrete pad to have it installed on his property. What was most impressive was how the sales team worked with his local mason to make the garage pad was just right.

They were in contact with the mason to be sure that the foundation was spot on.

Probably the most amazing for Jim was the timeline that Sheds Unlimited got the job done by. With only one foreman and two other younger men to do the job, Jim was skeptical and worried the job was going to take a while. Since he worked in New York City, he is not able to see the job progressing until he arrived home in the evening. However, he found it apparent that the work was getting done relatively quickly.

It took three working days for Sheds Unlimited to complete Jim’s beautiful four-car garage! The team began the project on a Tuesday and completed it by Friday. Jim was shocked by how quick the team worked, saying the crew “worked tirelessly” to complete his garage.

Jim says his neighbors came to admire his lovely prefab garage and they too were surprised with how fast the Sheds Unlimited crew finished the job.

The garage has become a place where father and sons spend time together working on their classic cars. There’s plenty of space to not only park the cars but to work on them as well!

Barn-Style Sheds: What You Should Know 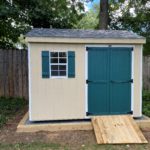 From start to finish, Sheds Unlimited made the experience superb. We were able to easily customize the shed. Customer service kept us informed about the status and possible windows for delivery. On the scheduled delivery date, the driver arrived right on schedule and easily installed the shed in our backyard – all in under 30 minutes. And, the shed looks great, and is really well made. Thanks so much. 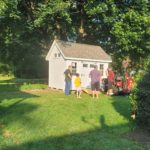 This whole process was a joy! Our shed is beautiful and the service was way more than perfect! Our delivery was fast, on time and the gentleman was calm and professional. Got the shed into our yard between the house and garage quickly and easily even tho it was quite a squeeze. Amazing!! My sister already said she wants one!!!