Rick Foehrenbach and his wife Debby built their home in 2014 and right after needed a new storage shed. They purchased the 14×22 shed from a local builder which worked out for them as they have had it for over 4 years now. Before purchasing his shed, someone told Rick to make sure he purchases double the size he intends on using and he says “wow, did that ring true.”

With no room left in their shed, they needed to find another option for storage space. They decided to take the leap in building their own outbuilding which started their journey by looking at pole barns which Rick thought would be the most cost-efficient solution, which he later stated “boy was I wrong!”

Rick & Debby began contacting a national builder of pole barns which ended up being too expensive for what they were looking to spend. After that, they tried a local pole barn builder which was slightly cheaper but still not in his budget range. His next step was looking at prices from the same builder that built his shed which was a better price but still more than he expected. Finally, Rick decided to go online and search for other shed & garage builders, that is when he found Sheds Unlimited.

“Their online price guide seemed too good to be true,” Rick said. He thought there would be some kind of catch or an extremely high delivery charge to his location so he made a phone call. He was assured that the price he saw was the price he’d get and he thought that was a deal-breaker. The delivery charge was cheaper than anticipated and Rick thought the staff was friendly and helpful that he could not pass up his chance with this builder.

Once he set his mind to Sheds Unlimited, he started planning for his 28×32 2 car garage man cave. He explained, “the process was so easy, and the design crew made all the adjustments and customizations a snap.” Rick and the team started with the standard building, then adding a higher-pitched roof in order to get a true second floor, they raised the first floor walls to fit 8’ garage doors to fit their boat and an added garage door on the side for the tractor.

We ended up with a building with far more features and better construction for less money than our local supplier.

This allowed Rick to put even more additional garage options on the building like the metal roof, cupola, and weather vane to make it fit better into their existing homestead and match the house. The designs were finalized, the order was placed, and the journey had begun.

Rick provided all the drawings and engineering for the building which made the permitting process in his town go smoothly. The next step was to remove the existing shed that was in the space Ricks new 2 car garage man cave would sit. Once the shed was removed, a contractor that Sheds Unlimited had recommended came and installed the concrete pad. This was a part of the project that had concerned Rick the most but it turned out to be easier than expected for him and he says within the scope of anyone.

Once the foundation was near completion, the delivery date was finalized and Rick had some last-minute changes he wanted to make although it was no hassle for Sheds Unlimited, and the changes got made right away.

They were very friendly and the job site was kept neat and tidy. The building was everything I expected and more.

What Does Rick Think of His 2 Car Garage Man Cave?

Rick is sure this 2 car garage man cave is what he needs. It fits all of his equipment with tons of room to spare. He says, “the amazing this was how complete it was, it even came fully painted which was not something that was included in the other companies I talked to.” There is not a day that goes by where Rick does not look out his window to see his new garage and is amazed at how beautiful it is and how it adds to the overall appeal of the property.

Rick continued to be amazed by the way Sheds Unlimited handles business. “The entire design process was done from the comfort of our own home, we didn’t even have to visit Sheds Unlimited.” He states that the entire process was so simple that he could tell Sheds Unlimited was a quality company. Since the build, Rick and Debby had several neighbors come over to see the building and they were all amazed at how nice it was.

The Next Steps to Rick’s 2 Car Garage Man Cave

Since Sheds Unlimited had constructed Rick’s 2 car garage man cave, he has done plenty to add to it. He has added solar electricity to the building and also a rainwater catchment system. He has been using the second story for storage and drying his garlic harvest. He states that the loft doors provide plenty of airflow to make an efficient drying area. The downstairs is utilized by the boat and the tractor, and he even has enough room for his Honda Ridgeline and his Honda Foreman ATV.

get a free project estimate

Thank you Sheds Unlimited for providing me with the building of my dreams.

Rick and Debby, allow us to personally thank you for doing business with us and continuing to provide nothing but positive feedback regarding your 2 car garage man cave. It has been a pleasure working with you and we hope you enjoy your 2 car garage for many years to come. 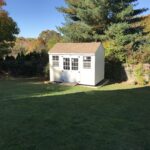 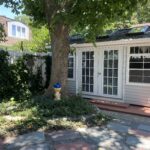 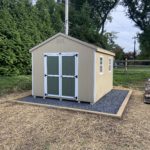 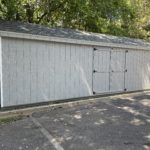 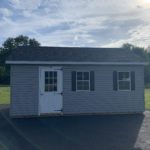 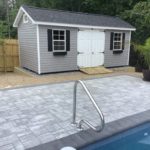